If you’re like most people, you probably don’t think about frozen pipes until it’s too late. By then, your pipes may have already frozen and burst, causing water damage to your home and costing you a lot of money in repairs.

So here’s to the homeowners suffering the wrath of frozen pipe bursts.

Mister Plumber is the friendly face who will show up on a snowy Thursday morning to save the day. We’re the go-to plumbing company for frozen pipe repair and replacement in the Greater Toronto Area. 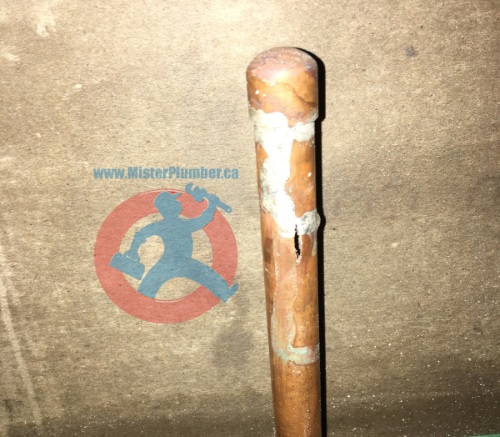 How do I know if a frozen pipe has burst?

You’re sitting comfortably on your couch, about to put on a Christmas movie for the kids while you sip your morning coffee. All is well. Or is it? What’s going on behind the walls? Are you truly at peace? Here are six signs of frozen pipes that burst:

If any of these things are happening in your home, it’s time to call Mister Plumber. We’re experts at frozen pipe repair and replacement, and we’ll have your home back to normal in no time.

⚠️ Take these steps if you have a frozen pipe burst

While calling in the professionals should always be your first step, there are a few things you can do in the meantime to prevent further damage.

Why do frozen pipes happen? *(Hint: not just because it’s “cold.”)

How to prevent pipes from freezing: What you can do as a homeowner

You may not be able to control Toronto’s freezing wind chills, single-digit temperatures, or sudden cold snaps – but there are several things you can do to protect your home (and your pipes) from the cold.

Worried about frozen pipe bursts this winter? Mister Plumber is here to help. We offer a FREE consultation to assess the situation and provide options for repair or replacement.

Get professional frozen pipe repair or replacement by calling us at +1 416 939 1530 or via the contact form.

Scroll to top
Accessibility by WAH