One day you notice a dark splotch on your ceiling or wall, which appears to be growing a little bit every day… uh oh. No homeowner likes dealing with leaky pipes, but it can be especially aggravating when the pipe in question is tucked behind a wall, or in the ceiling above a frequently used room. If left overlooked, a leaky ceiling or wall can cause unhealthy mould to make its way into your house, and can eventually cause structural damage. If you see a water blotch anywhere on your ceiling or wall, don’t hesitate to call an expert Toronto plumber to take a look.

A leaky ceiling is a problem that we plumbers have to deal with pretty often. With the amount of pipes and joints snaking their way around your house, feeding your home with fresh water, it’s no wonder that problems occur every once in a while. In this article, we will walk you through how to determine whether your leak is a plumbing issue, some of the common reasons behind leakages, how we investigate leaks, and how we repair the leak.

Not all leaks are the domain of plumbers. If there is leak from your ceiling on the second floor, for instance, and there is only a roof above it, it is not a plumbing problem; you instead have to find roofer to check the conditions of your roof’s shingles, as well as the flashings – waterproofing materials – around your pipes, vents and chimneys.

However, if there is a water leak or water stains on a ceiling that has a washroom upstairs from it, there is a 99% chance that it’s a plumbing or drain issue (the other 1% is included for those rare cases when water travels along the stack vent from the roof). In this case – or in any case of which you are unsure the origin of the leak – call Mister Plumber immediately and we will assess the source of the issue, as well as offer repair suggestions.

Behind your drywall, there is a veritable maze of both waste and cold/hot water pipes, and among these pipes there are dozens of connections – plumbing joints whose seals might be loose or, worse yet, old and eroded. Any of these connections can be the source of the problem, but they aren’t the only reason you will find wall and ceiling leaks.

The most common reasons for leaking are ones that many people don’t even think about: worn wax between the toilet and flange, overflow from a failed bathtub drain assembly, and a faulty rubber O-ring on your tub spout diverter, to name just a few. These are niche issues that aren’t easily spotted by the average homeowner (nor even the average handyman) and require the trained eye and professional touch of an experienced plumber.

Ideally, the investigation of the leak has to be done by cutting your drywall and tracking down the damage caused by the leak. Sometimes, the water spot on your ceiling is not the place where the leak’s source is located; water can travel on a sloped ceiling to the nearest drywall connection or pot light hole, so determining the source of the leak becomes a matter of tracing the water back to its originating fault. This has to be done with the utmost care, however, in order to avoid further structural damage.

It is very helpful when homeowners track the issue and are able to provide their plumber with details, like when the leak was first seen, what work has been done in the washroom, and whether the leak happens after flushing a toilet or taking a shower, etc. Any details like these can help the plumber (who is sort of like a plumbing detective!) gain a better sense of what’s causing the problem, and how to fix it – whether they need to repair a burst pipe or just replace the toilet gasket.

When repairing a leak, great plumbers (like Mister Plumber, of course) always try to minimize damage to the walls. For example, rather than breaking bathroom tiles to get to some pipes, it is smarter to cut the drywall on the other side of the tiled wall, because, of course, drywall repair is less expensive compared to installing new tiles. A plumber should always take little things like this into consideration – it’s a plumber’s job, we believe, to fix your problem with as little incidental cost as possible.

In the pictures above and below, you can see water damage on a ceiling that was caused by deteriorated grout and a lack of silicone around the tub spout. The leak depicted here was only happening when the homeowner took a shower, so we determined that water was sprinkling into the wall and flowing down behind the tiles and cement board. In this instance (as well as for many similar leaks) Mister Plumber used clear silicon to make a watertight seal between the shower fixtures and the tiled wall, that way water could not seep through the tiles. 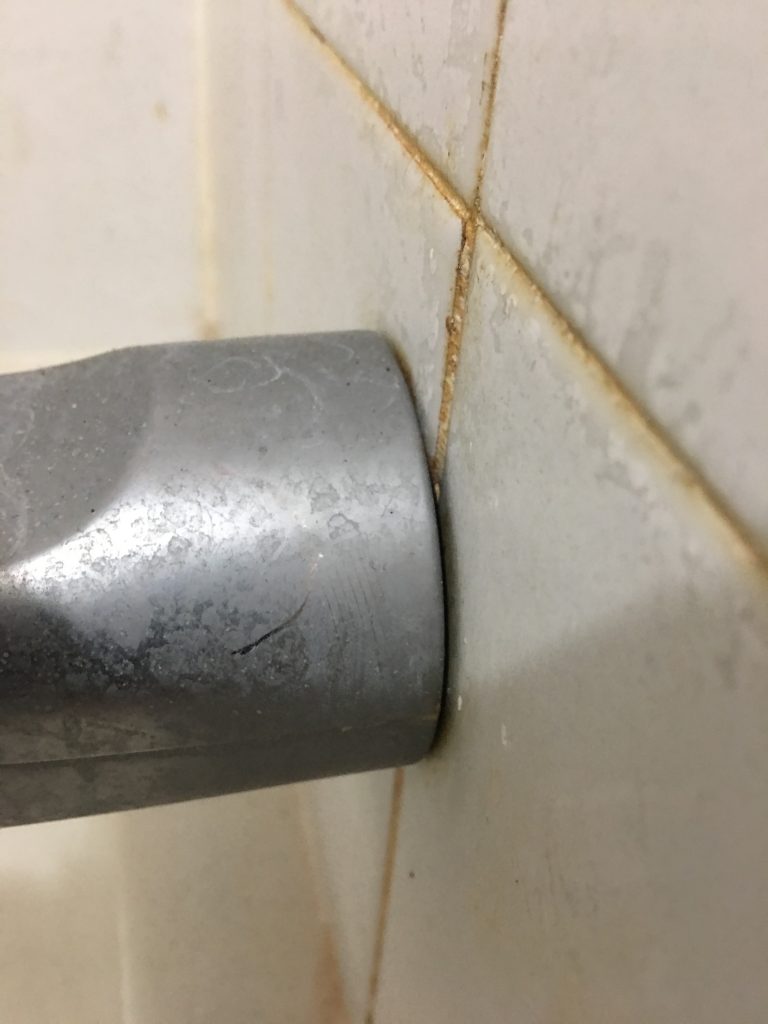 As you can see, fixing a leak in the ceiling or wall is no simple feat. It takes an experienced plumbing sleuth to figure out the source of problem, and to address it without doing undue damage to the house. Leaks happen for a number of reasons – they are, unfortunately, a fact of life for many homeowners – but with the right plumber you can ensure that your house stays leak-free in the future.

Restoration of concrete floor in the basement after water pipe replacement