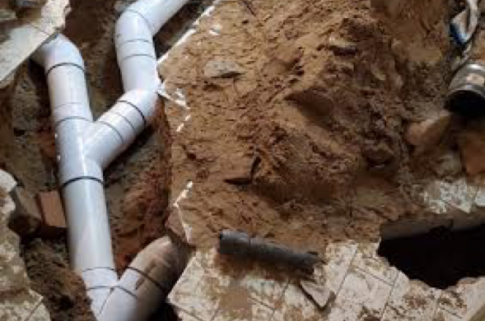 Do you remember when you were a kid, and your parents would ask you to go clean your room? Begrudgingly, you would obey, but instead of doing a full, deep clean – vacuuming under the bed, reorganizing your cluttered drawers and closet, etc. – you would just stuff everything away so the room looked clean.

It’s a normal way of looking at maintenance: make sure everything you can see is presentable and in working condition. As for the things you can’t see, only address them when there’s an issue. For the most part, this approach works. But, with plumbing, those unseen issues can be quite consequential.

Everything in the entire world ages, and as things age they start showing signs of deterioration – slowly, in some cases, but certainly noticeable over a long period of time. This happens with drain and water pipes too. Even though they appear out of sight, underground, seemingly protected from all the wear and weather of above ground plumbing, time and deterioration take their toll on underground pipes too.

A lot of houses in Toronto still have their original drain and water pipes underground – in some cases pipes over a century old. While above ground, homeowners will upgrade the plumbing – in some cases frequently, due to multiple renovations – underground, the utilities might remain untouched for long periods of time.

In this post, we’ll discuss a couple of the most common problems homeowners face with their underground pipes, as well as how to know when to call a Toronto plumber for help.

When to Dig Deeper

It’s understandable that many homeowners just concern themselves with surface-level plumbing problems. After all, if your underground plumbing is solidly built and maintained, it shouldn’t be something you have to continually worry about. When you’re driving in your car, you usually only worry about your oil when your oil light comes on – and sometimes, you wait even past that point, until a problem arises.

This is to say that it’s understandable if you don’t spend your waking hours worrying about a feature of your home that is literally out of sight. People usually only start thinking about their main drain when a real problem occurs, like a sewage smell or a backup.

If you are planning on buying a new home, regardless of how old it is, it’s a great idea to include drain inspection as part of your home inspection plan, that way you aren’t buying a property that needs major work (or, at least, you know the cost of the work needed before you purchase).

Even if you have lived in your house for some time, and there are no tangible signs of plumbing issues, other than the occasional clog, drain inspection should still be a part of your regular maintenance schedule.

Whether you wait until an emergency arises, or inspect your underground pipes regularly, here are some fairly common drain issues you might face.

The Issue With Clay Pipes

Clay pipes seemed like a good idea to plumbers throughout most of history, as far back as the Babylonian empire. After all, clay was abundant and easy to extract. The problem with clay pipes, however, is that they can easily get hairline cracks in them, where roots grow in. The roots naturally gravitate toward the inside of the pipes, because it’s a favourable environment for growth, with plenty of nutrients.

The more the roots grow, the bigger the crack they make. Eventually, roots restrict the flow of the pipe, and cause it irreparable damage.

The sewer scope we use here at Mister Plumber makes records of when pieces of clay pipe fall inwards causing blockage. Such blockage cannot be released by the snaking machine every plumber uses. The only way to fix such problem is to physically replace the pipe.

Nowadays, though, you can see how Toronto plumbing has changed – instead of clay, plumbers use PVC pipes, which are advantageous for numerous reasons. PVC pipes are pretty long and light compared to clay, meaning that there are fewer connections that roots can compromise. And all connections are glued, which makes roots penetrating impossible.

The replacement of old clay pipe can be done with a special torpedo that goes through where the old pipe serves as a guide. This technology is used on straight runs of pipe without a Y-connection.

The Issue With Lead Water Pipes

Another important underground utility is the water pipe. We rely on the water pipe to feed our homes with clean, healthy, necessary water, but older water pipes, often made of lead, are considered dangerous these days.

As the lead in the pipes corrodes, it makes its way into your drinking water, which can cause serious long-term health problems, especially for infants and children. It’s such a widespread issue that the City of Toronto has a lead pipe replacement program it runs.

If you think your home has lead pipes, we immediately inspect your drains and replace those lead pipes with copper. Not only are copper pipes durable and easy to work with, but also, crucially, they’re non-corrosive, meaning no harmful metallic stuff will leach into your water.

Another, you might say incidental perk of replacing lead pipes with new copper pipes is that, automatically, we increase the size of the water pipe, as new plumbing codes require a minimum 3/4” inside diameter for one family dwelling. As a result, in addition to the water being free of contaminants, your house’s water pressure improves, and multiple fixtures in the house can be used simultaneously.

There’s a whole world going on underground. Don’t just put it “out of sight, out of mind”. Fix your underground plumbing problems by calling Mister Plumber today.