Summer is here, which means the sun is shining and the sky graces the city with the occasional heavy rainfall. This is wonderful for us, because it means we can enjoy the sunshine, while still getting the occasional reprieve from the heat when the rain cools everything down. And it’s wonderful for the flowers, plants and trees that mark our yards. What it isn’t good for, however, is clay piping. 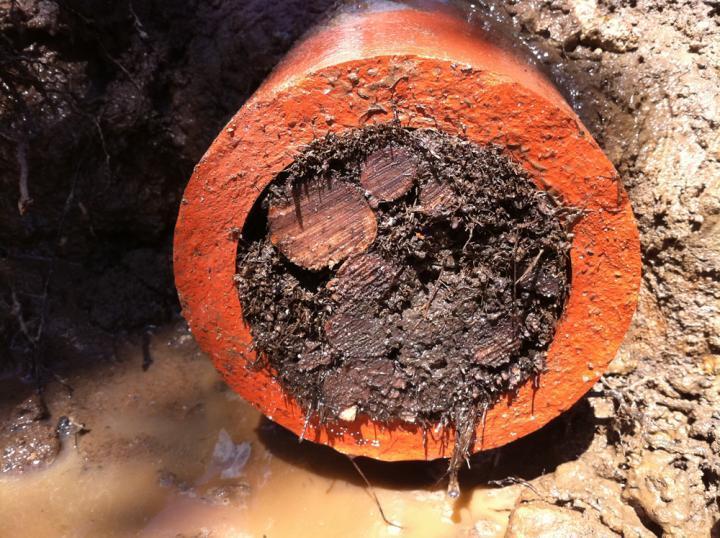 You see, when the rain starts getting into the ground, tree roots start moving towards the source of the water, branching out in a complicated network. The roots fortify and can eventually choke your clay pipes, breaking through them and causing serious damage. This can lead to expensive sewer repair, which is not only a financial drain (no pun intended) but a real headache to deal with. 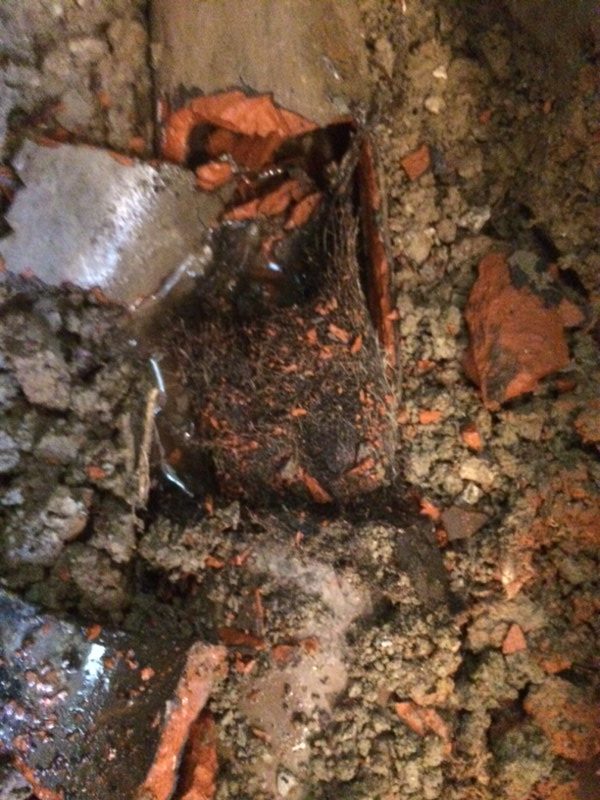 You can see what happens in the picture above: the roots grow into the sanitary drain, which is made of vitrified clay, and cause it to split apart. The image quality isn’t fantastic here, but it should give you a good idea of the process. It’s a nasty thing to have happen to your sewer system, and any plumber in Toronto will tell you that if you have old clay pipes, your home is susceptible to the problem. So, if this is such a problem with clay pipes, why was the material used in the first place, and why did people continue to use it when constructing homes?

To answer that, we have to go back 6,000 years to the ancient state of Babylonia, where piping materials made of clay have been found at archaeological sites. It was used in Turkey as well, and Rome too, prized for the abundance of its material, as well as its ability to withstand acidic wastewater. It’s a heavy material, which is why it wasn’t always used throughout history, but by the time North America was colonized and railroads were built, transport became much easier, so its use became ubiquitous. Fast forward to present day, and that’s why you’ll find clay piping in a lot of older homes here in Toronto.

Here’s the problem, though. Old clay pipes were short pieces because they were heavy and hard to work with – manufacturers made the pieces 3-4 feet long so one guy could carry it, without having to resort to machinery. This wouldn’t normally be so bad, but having short pieces meant that a lot of joints also needed to be installed. The more joints there are, the more opportunities roots have to start growing through hairline cracks; then, the more the roots grow, the bigger crack they make, eventually resulting in complete blockage or pipe collapse.

It is very good environment for roots inside the pipe. As a result, the pipes are stuffed and you get sewage backup, which can cause all sorts of damage. Filthy water might start rising up to the floor drain, carrying with it a whole bevy of bacteria and germs. These can, in turn, cause a number of health problems for family members living in the house – if you’ve come into contact with the affected water, you might experience nausea, vomiting, abdominal pain or fever. Don’t hesitate to call Mister Plumber when you see your floor drain flooding – we’ll get to the root of the problem (this time the pun was intended!)

For all these reasons, plumbers from the mid-1980s started using PVC pipes, and that’s what we recommend you replace your old pipes with. Just like how we offer lead pipe replacement services in Toronto we also offer clay pipe replacement. But what is PVC? Well, PVC stands for polyvinyl chloride – the lightweight, ultra-hard synthetic polymer that these pipes are made of. Instead of the short, stubby clay pipes, new PVC pipes are 10 feet long, and since the material is so lightweight, one plumber can easily carry them. Also rather than simply fitting the joints, all joints are glued, so there is no chance for roots to make their way in. 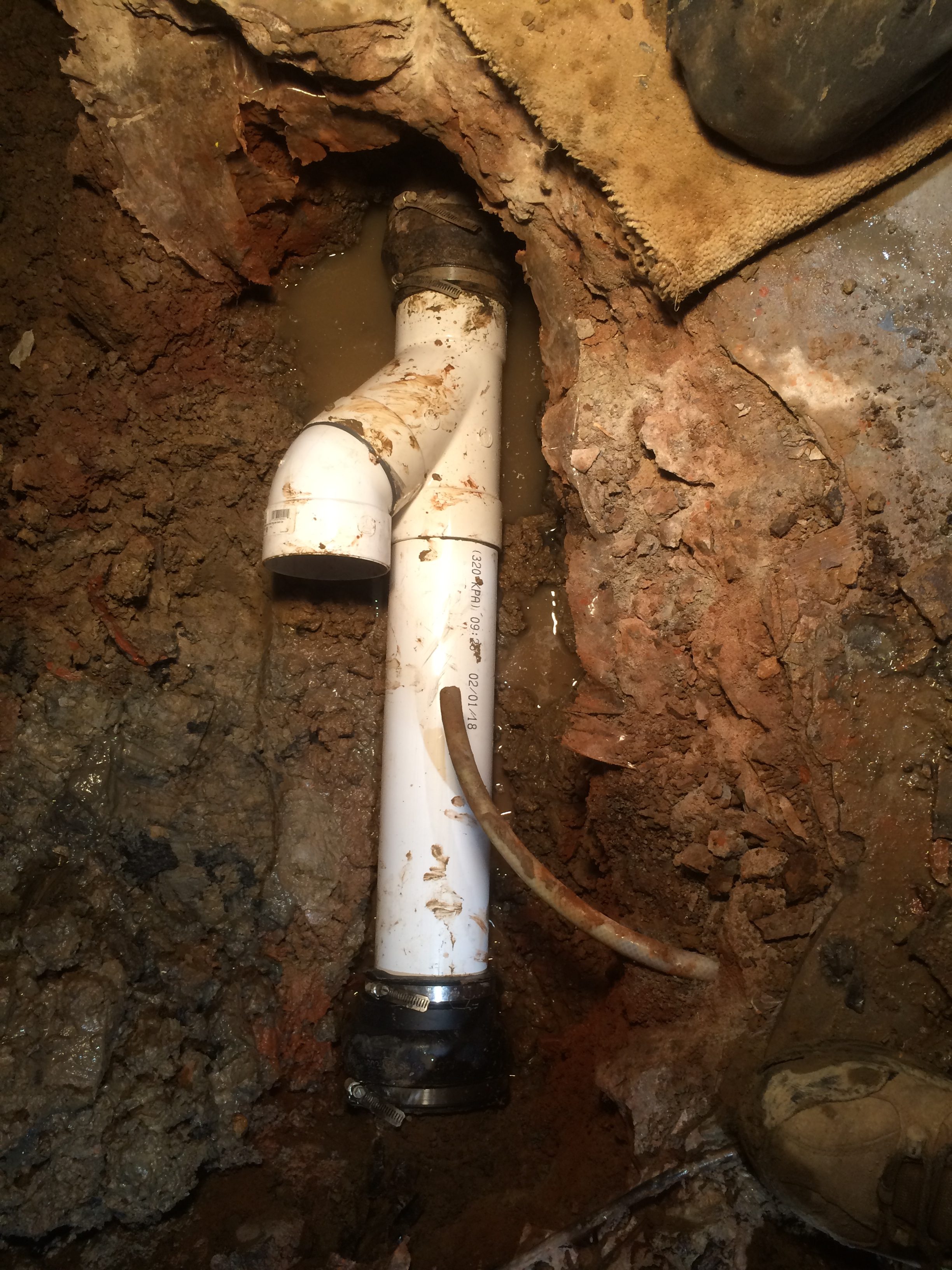 This is why approximately 10 years ago the City of Toronto started a “root rebate “ of $2000 if old pipes that have been damaged by roots are replaced with new PVC. The problem was widespread enough that the city had to intervene. You might think this would mean that every house is now fitted with new PVC piping, but that is sadly not the case. A lot of people neglected to take the city up on its offer, either because they didn’t know about the offer, or were unaware their home had clay pipes.

What this means is that even new homeowners now who buy an older house might still find that they have old clay piping. When you buy a house, the home inspector doesn’t check the underground drain because it requires using expensive equipment, as well as skills and experience that just aren’t available. You could be sitting on old clay piping and not even realize it.

If you ever experience filthy water in your ground drain, contact us today without delay and we will figure out what the issue is. But even if you can’t see any tangible problem like filthy water, it’s still best to be proactive and have us check out your piping, just in case you’re one of the unlucky homeowners still saddled with the burden of clay pipes.

In conclusion, you want to enjoy the summer, and all the weather that it brings. You don’t want to have to worry about all that rain pushing roots into your piping, and you certainly don’t want to worry about your family coming into contact with filthy water. Before the summer is out, call us up and let us come take a look at your piping to determine whether your old clay pipes need to be replaced by new PVC. As homeowners here in Toronto as well, we have your peace of mind in mind!